Back with some 28mm figs

The recent release of wave 2 of Bloody Miniatures lovely figs had us reaching for credit cards and rummaging in the shed for our unmade figure stash...

With an eye to using Pikeman's Lament, this may be our upcoming Summer project 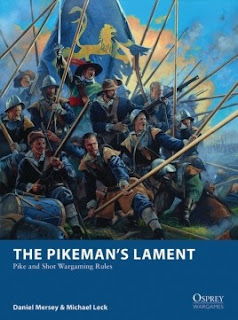 Email ThisBlogThis!Share to TwitterShare to FacebookShare to Pinterest
Labels: 28mm

I'm not one for the myriad of online quizzes and self-classification "tools" out there, but this one took my fancy for a laugh as it helps decide the answer to the pivotal question:

"Declare Sir - are ye for King or Parliament?"

Those of you who might know us in person will be unsurprised to find that I was revealed as....


While "Comrade" Alan was unsurprisingly (and very proud to be) a Leveller!
Posted by Paul O'G at 20:52 1 comment: 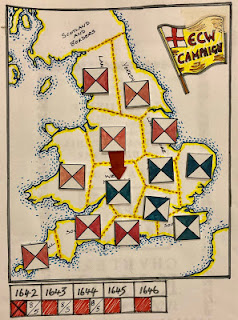 Peter over at the blog "Grid based wargaming - but not always" has been playing a most entertaining ECW campaign. He is using an interesting region based system with random events cards that impact the major battles. Well worth checking and reading through the mechanics he has used. 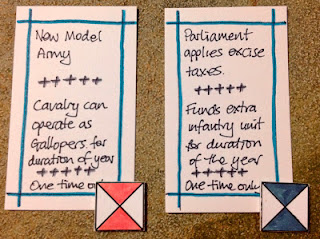 Email ThisBlogThis!Share to TwitterShare to FacebookShare to Pinterest
Labels: Resources 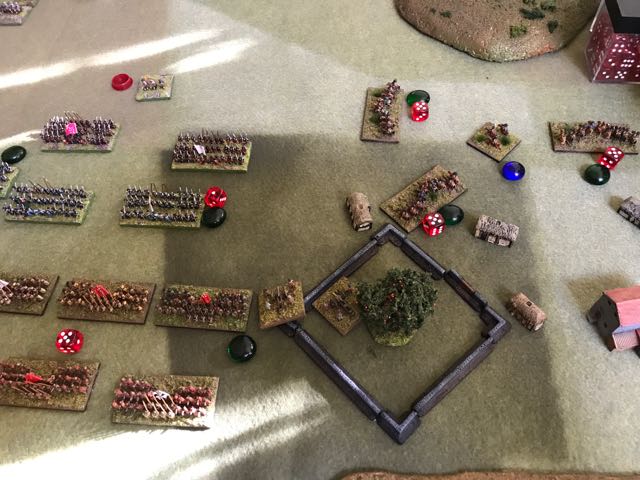 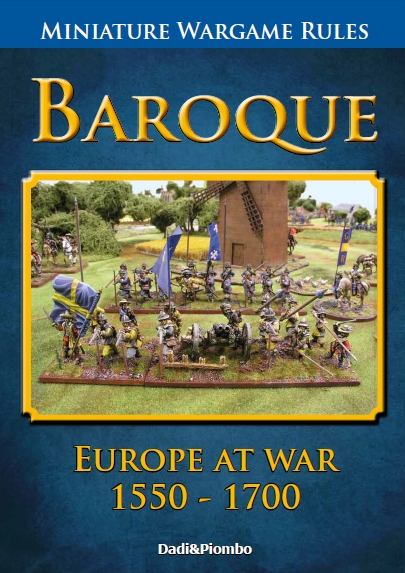 Yes its been a dearth of ECW goodness around here but I think we are getting back on track now.  This week Dux and I were treated to a fantastic game of 28mm ECW by Millsy and got to play with all his lovely models - lots of pics and Battle reports here, here and here.
The rules we used were Victory Without Quarter by Clarence Harrison of Quindia Studios
Available (legally) off the Internet for free here: Link
These are my thoughts, noting that this was the only time I have played them.

Bottom Line Up Front - these are a fun, easy to pickup set of rules which really captured the period flavour without an overloading stack of detail.

The key mechanism is randomised card driven system.  Each unit has a card randomly shuffled into the deck so you don't know what order they will come in.  Shuffled in are Artillery units (both sides fire together), Reload Cards (which allow Volley Fire) and a Turn End card which ensures that you never know if a unit will get to activate or not before the deck is reshuffled.  The end result is a tense randomisation that can be as frustrating as heck, but definitely gives you the feeling that you aren't fully in control (which of course was exactly the situation).

Units get 2 or 3 dice per element to fire, depending on what they are, with 5+ (on a d6) being the target roll.  If you get three hits you inflict a casualty and cause a morale check roll.  After 3 casualties the unit dissolves.  Melee uses a similar to hit roll but the unit which inflicts more casualties winds the combat and repels the enemy unit.

Available units are Foote, Commanded Shotte, Dragoons (which can dismount obviously), Horse (Gallopers, Trotters, Cuirassiers) and Artillery (which is immobile) - each unit is comprised of 3-4 elements.  Army and Brigade Commanders are modelled individually. Units are rated as Veteran, Trained and Raw, which gives them various modifiers in Combat and to their morale test.

Overall, the system works nicely without getting too bogged down in detail. You can feel the difference between the different units types but its not overpowering.  The real challenge is trying to run a battle with random unit activation and no guarantee of any specific unit getting a turn before the turn over card shows up.  It was really enjoyable and we were quickly fighting the battle, not messing about with the rules.

With a view to 6mm battles vice 28mm scared ones, we've been thinking about how that might work with 12+ Regiments per side and single base units. We think that Brigading the formations would be the obvious way forward.  Looking forward to giving that a try sooner rather than later!

We are hoping to try the same scenario with a few different sets of rules too, so we can compare them: these have been a good start, and also in the mix are Baccus' Polemos and the newly published Baroque Impetus.

Thanks for the great day out and taking us through the rules Millsy!
Posted by Paul O'G at 08:45 7 comments:

Email ThisBlogThis!Share to TwitterShare to FacebookShare to Pinterest
Labels: Rules

More goodness from the brushwork of Sir Dux, MP to add to his northern rebel force 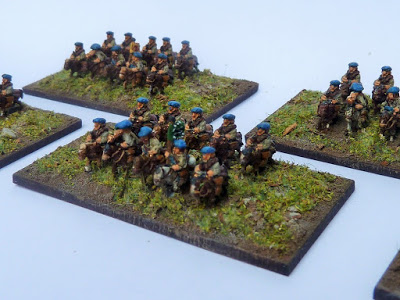 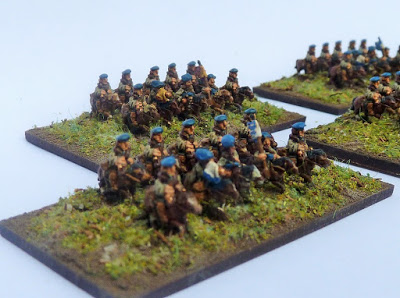 ECW Relics at the Tower of London

Some eye candies we found while visiting the Royal Armouries exhibit at the White Tower recently: 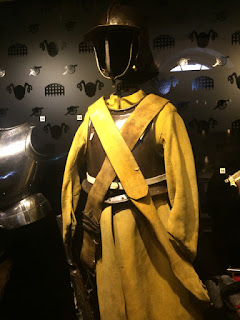 His Majesty at the National Portrait Gallery 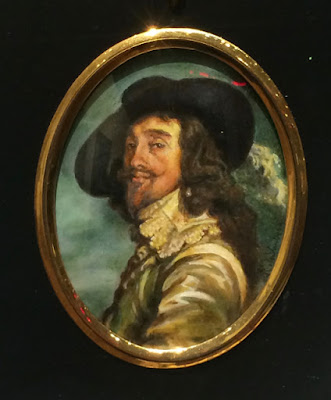 A visit to the Houses of Parliament

...to find this chap looking down disapprovingly at me! I think he can sense my Royalist tendencies... 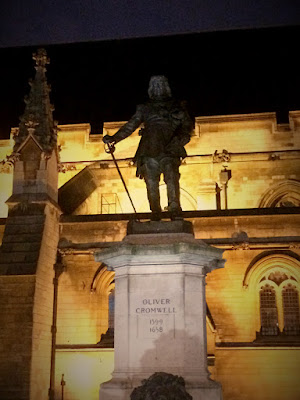 It has been a long time since I've done anything on our ECW project, but with Paul heading back to the same hemisphere soon it's time to get cracking. To get some runs on the board I've been painting Covenanter infantry, and nice and simple they are after the army of Republican Romans in 28mm I've been painting over the past few months.

I've altered my painting style on these little chaps compared to my last lot of English troops. I've generally gone for lighter shades and haven't used any washes. What do you think?

Oh and Paul - don't call them rebels. They're the forces of the Scottish government, right?!
Posted by Dux Homunculorum at 06:23 14 comments: 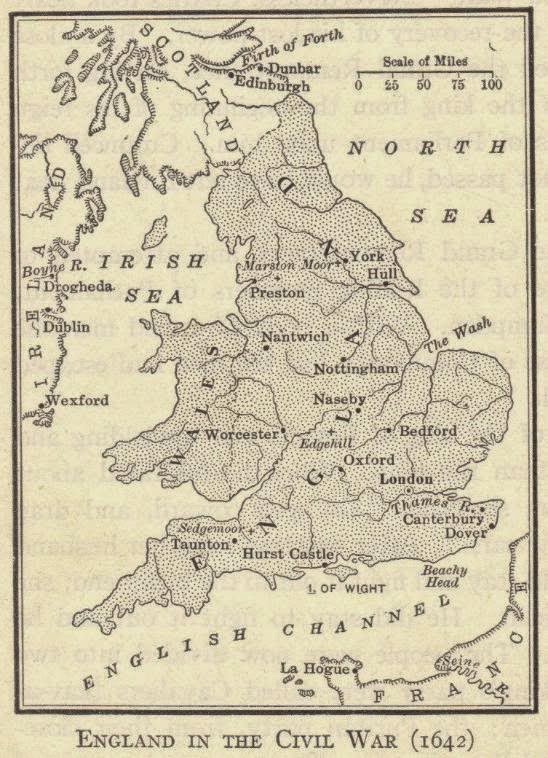